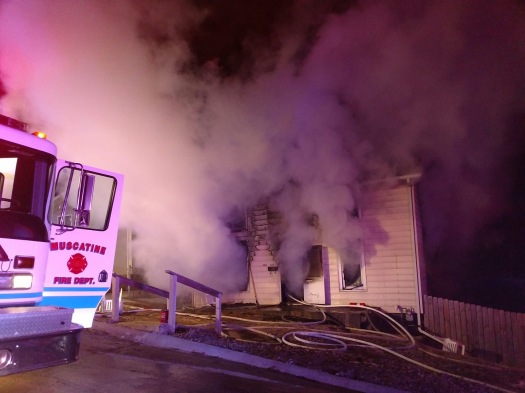 MUSCATINE, Iowa – An above normal number of residential structure fires in April has drawn the concern of Muscatine Fire Department officials who urge area residents to take the time to discuss fire safety with their family.

Residential fires today burn quicker and hotter than residential fires 20 or more years ago mostly due to the materials used in construction and materials used in the manufacture of households goods. A complacency with the dangerousness of fire, the lethal qualities of the smoke, and the lack of awareness for the fire safety have also contributed to a society not willing to confront the issue until something bad happens.

Something bad did happen in February when three persons died in a residential fire.

COMMONALITY OF THE FIRES

Hartman said that one of his frustrations is finding any commonality of the recent fires with the causes all across the board.

“We have had some cooking fires and some careless disposal of hot coals from a fire pit,” Hartman said.

The abuse of extension cords has also been among the causes of residential fires.

“But the only real commonality is the carelessness and lack of appreciation for the seriousness of fire,” Hartman said.

Some of that carelessness comes from not understanding how different and potentially more deadly materials used today are as opposed to materials used 20 years ago. Synthetics are used in the manufacturing process today which enables the manufacturer to keep costs down and increase the variety of products available. That also benefits the consumer.

Synthetics also have a darker side, however, they burn hotter and quicker than natural materials.

“You can go from a small fire to a big fire rather quickly,” Hartman said. “A fire in a room can turn into a room full of fire in just two or three minutes leaving little time for a family to react and escape. Twenty years ago, with natural products, that escape time could be 30 minutes.”

Increased health risks with the use of synthetics and composites in today’s construction. Restoration companies are more incline to tear down houses damaged by fire than to just cleaning them up.

Restoration companies have been hired in the past to clean up after fires by rinsing down the walls and perhaps using special paints to help with the smoke smell. Today, these same companies would have to clear everything out down to the studs and then spray before repairing the damage and that costs a lot of money.

“What burns today is a lot worse health wise than what burned in a home 20 years ago,” Hartman said. “Most restoration companies are not comfortable with just washing down the walls because of the liability and long term obligations to customers to not put them in situations where they are exposed to these cancer causing risks.”

An escape plan on what you, and your family, would do to safely leave your house or apartment in the case of a fire or other natural disaster should not be put on the back burner, so to speak. The National Fire Protection Association (NFPA) advises that your ability to get out of your home during a fire depends on advance warning from smoke alarms and advance planning. The NFPA provides escape planning tools to help families prepare for a fire emergency.

Families need to gather together, develop a plan, and then practice that plan.

“We talk with our children about what to do if somebody drives through the neighborhood in a weird looking van or we talk to them about school shootings, but we forget to talk with them on what to do if there is a fire in your house,” Hartman said.

Hartman recalled a conversation he had with a parent recently who said “we told our kids that if the smoke alarm goes off, come find mom and dad, let us know, and we will get out together.”

“I understand the reason behind that but these fires can turn deadly in just two to three minutes,” Hartman said. “If your kid wakes up and thinks they know where you are but doesn’t really know where you are, then they are walking around the house looking for you when they just need to get out.”

The majority of fire victims in Muscatine over the past 20 years have been the young and the old. One victim was not at either end of that spectrum but was with two young children.

“Unfortunately, we as a nation and we as a culture have very little appreciation for the deadliness of smoke and fire,” Hartman said. “When the smoke alarm goes off, you need to have a plan and you need to get out. It doesn’t matter whether you meet at a tree in the front yard, a tree in the back yard, or at a neighbor’s house … just get out and stay out.”

THE VALUE OF SMOKE DETECTORS & SPRINKLERS

Working smoke detectors and carbon monoxide detectors (both required by Iowa law) are important tools in the prevention of fire injuries or death.

“Having working smoke detectors is a message that we continue to hammer on,” Hartman said. “Looking at these recent fires, most had detectors but not all of them had operating detectors.”

Almost three of every five home fire deaths resulted from fires in homes with no smoke alarms (40 percent) or not working smoke alarms (17 percent) according to the NFPA.  The NFPA also notes that properly installed and maintained smoke alarms play a vital role in reducing fire deaths and injuries, and save lives. Smoke Alarm Safety Tips

Smoke from a fire in your home spreads fast and smoke alarms give you time to get out and stay out.

Hartman is also an advocate for the installation of sprinkler systems in homes.

“Response time for fire departments are not as good as what we would like for them to be but they are not horrendous,” Hartman said. “Having a sprinkler system in residential homes would help.”

A point that Hartman continues to emphasize is that a fire in a room can become a room full of fire in as little as three minutes.

“Think about how long it would take for you to get in your car and drive to the nearest fire station,” Hartman said.

Once a fire is identified and 911 is called, fire fighters on duty need to put on their gear and then drive to the location of the fire. Once at the location, fire crews have to put the fire truck into pump, drag out the hose(s), find the fire, turn on the water to get through the fire hose(s), and then attack the fire.

“It takes time,” Hartman said. “A residential sprinkler system installed in the home would have activated at 130 degrees and potentially save lives and the home.”

One of the criticism of a sprinkler system is the amount of water damage to the home.

When a family says goodbye to a husband or wife, father or mother, brother or sister, there is no guarantee that the family will see them tomorrow.

“We train for all situations,” Jerry Ewers, Muscatine Fire Chief, said. “But just like all first responders who put their lives on the line to protect and serve their communities, there are no guarantees.”

The only fire fighter fatality that Muscatine has experienced came during a residential fire but there have been plenty of injuries and close calls.

Recently, fire fighters were dispatched to a garage fire where the roof collapsed just seconds before fire fighters entered the structure to attack the fire.

“The reason the roof collapsed, and it was a big chunk of the roof, was that it was newer construction,” Hartman said.

Hartman said that fire fighters will assess the age of the home when they first arrive at the scene of a structure fire. Those built in the last 20-30 years have elements of “light weight construction” or the use of engineered wood instead of solid wood.

“Light weight construction helps to make the house open and beautiful but it is horrible for firefighting,” Hartman said.

The rule of thumb, according to Hartman, is that with a fire in the attic of a light weight construction home, the roof will collapse in six minutes.

“The call process, the turn out time, the drive time, set up time, all could put us right at that mark when we would put someone on that roof to vent it,” Hartman said.

Older homes have their problems too including not having fire stops which would prevent a fire on the first floor from dropping down into the basement or going up into the second floor or attic area. Remodeling also poses problems if that work is not done by professionals and not done to code.

“The older houses are better in some ways but in some ways they are not,” Hartman said. “Residentials are kind of a unique animal.”

Just like planning how to escape a fire, it takes planning and training to attack the different kinds of residential fires.

“We even had one recent residential fire that had extension cords running through the entire place and that is actually what caused the fire,” Hartman said. “They had a small extension cord with a surge protector plugged into another surge bar that was plugged into a heater.”

Extension cords are not meant for that kind of abuse and the heat generated from their overuse can cause fires.

“The more you plug into them, the more dangerous it is,” Hartman said.

MESSAGE OF THE DAY

In simple terms, fires are not like what you see in the movies. Fire is hot, fire is fast, fire is dark, and fire is deadly. In fact, smoke and toxic gases kill more people than flames do.

The most important message of the day, according to Hartman, is awareness. Parents need to reinforce the lessons of fire prevention and using an escape plan.

“We try to connect with every school child in the third through fifth grade with fire education,” Hartman said. “If they take that home and discuss it with their parents, then we have success.”

There have been many instances of fire education success including one recent event where an individual on a riding lawn mower tipped over and caught fire.

“He jumped out and started running around with his clothes on fire,” Hartman said. “Some children across the street saw this and yelled at him to stop, drop, and roll. He did and that put the fire out.”

Stop, drop, and roll is something the children learned from the program offered by the Fire Department in the schools.

If you would like more information, or a home visit, please contact the Muscatine Fire Department directly.

“We would be more than willing to help you and to make sure your house or home is safer,’ Ewers said.