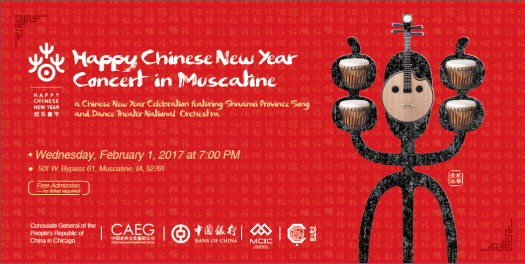 Special guests Governor Terry Branstad and his wife Chris will attend the Chinese New Year Concert in Muscatine on Feb. 1 at 7 p.m. The concert will be held at Calvary Church, 501 W. Bypass 61 and will feature the Shaanxi Province Song and Dance Theater National Orchestra. The event is free and open to the public. No tickets are required.

The concert will serve as a Chinese New Year celebration for the community as well as a time to recognize Governor Branstad for his commitment to the relationship between the State of Iowa and China before his pending appointment as U.S. Ambassador to China.

In 1983 Branstad was in his first term as governor when he signed the first sister state relationship agreement between the State of Iowa and Hebei Province. Following the sister state agreement, a small delegation from Hebei visited Iowa in 1985 to learn about modern agricultural techniques.

One of the members of the delegation was a young agricultural official named Xi Jinping.

At the time, Xi and the delegation were welcomed into the governor’s office where Branstad built relationships with the guests.

Xi’s 1985 trip to Muscatine and the State of Iowa was the beginning of a friendship between Muscatine and China.  No one would have imagined that the young agricultural official they hosted in 1985 would go on to become the President of China.

When President Xi refers to those he connected with during his 1985 stay in the state, he calls them his “old friends.”

Sarah Lande of Muscatine is among one of the “old friends” who hosted the delegation in 1985.

Lande said the Chinese New Year Concert will be a time to celebrate Chinese culture in Muscatine and also wish the governor well before he undergoes the appointment process.

“Our relationship with China has truly come full circle!” Lande said. “When Governor Branstad first signed the sister state agreement with Hebei, the goal was to build friendships. Now he’s the nominee to be the U.S. Ambassador to China.”

Muscatine’s sister city of Zhengding County, China is where President Xi Jinping held his first governmental position. Today, Muscatine has a thriving sister city relationship as a result of Governor Branstad’s work in establishing the sister state relationship and the hospitality shown by volunteers in Muscatine in 1985.

“It warms our hearts to celebrate this occasion as it gives us hope for the future of U.S. and China relations,” Lande said.

The concert is being sponsored by the Bank of China, the Consulate General of the People’s Republic of China, China Arts and Entertainment Group, China Window Group, and the Muscatine-China Initiatives Committee.

All are invited to attend this night of celebration in Muscatine!

One Reply to “Governor Branstad to Attend Chinese New Year Concert in Muscatine!”